Ivy and Samuel were married on the 2nd November 1921 at the Methodist Church in Lismore, NSW by M Walker. Samuel was the son of Joseph BETTENS and Ellen VENABLES. Samuel was a labourer and he resided at Byron Bay, NSW. Witnesses to the marriage were Joseph Bettens, Samuel’s brother and Violet Layton, Ivy’s sister. 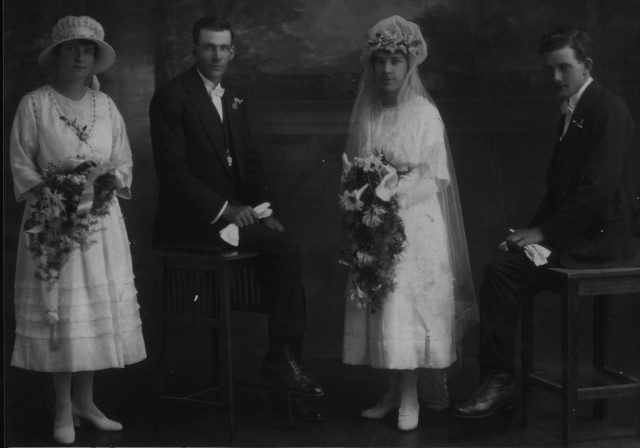 Ivy hated her middle name ‘Maggie’, and Sam used to call her Maggie to tease her! Sam was a Tick Inspector for many years in the Grafton-Casino area. When he and Ivy married, he was already a veteran of war, having enlisted at the age of 19 years and 5 months on the 9th June 1915 at Brisbane, QLD No. 1231, where he joined the 9th Reinforcements, 5th Light Horse. He later transferred to the 54th Battery, Field Artillery as a driver.

From The Fighting Sons Of The Empire: Driver Samuel J Bettens (1231), 54th Battery, 14th FAB, is the son of Mr and Mrs Joseph Bettens, of Broken Head, Byron Bay, and was born at Willinga Lake, Termeil, South Coast, and educated at Tomerong, Nowra. He is 22 years of age and enlisted at Lismore in May 1915, and went into camp at Enogerra on 3rd June. He left Australia the following September, and was training in Egypt for six months, prior to being sent to France. He was one of the first Australians to land in France, and has been on active service the whole time, with the exception of fourteen days furlough, when he took the opportunity of touring Scotland and England. He was originally attached to the Light Horse, but was transferred to the Artillery while in Egypt.

Ivy passed away aged 75 years from cancer, and Samuel passed away at Newcastle, NSW in 1986. He was cremated at Beresfield, and his ashes are interred with his wife’s at Goonellabah Crematorium, NSW.

Funeral Notice: The relatives and friends of the late IVY MAY BETTENS, of 103 Hotham Street, Casino, beloved wife of Mr Sam Bettens and loved mother of Hazel (Mrs Swanson, Sydney), Neil (Newcastle) and June (Mrs Parbery, South Grafton) are respectfully invited to attend her funeral to move from the Methodist Church, Casino, after a service commencing at 9.30am today (Friday) for the Lismore Crematorium.

Ivy and Samuel had three children: